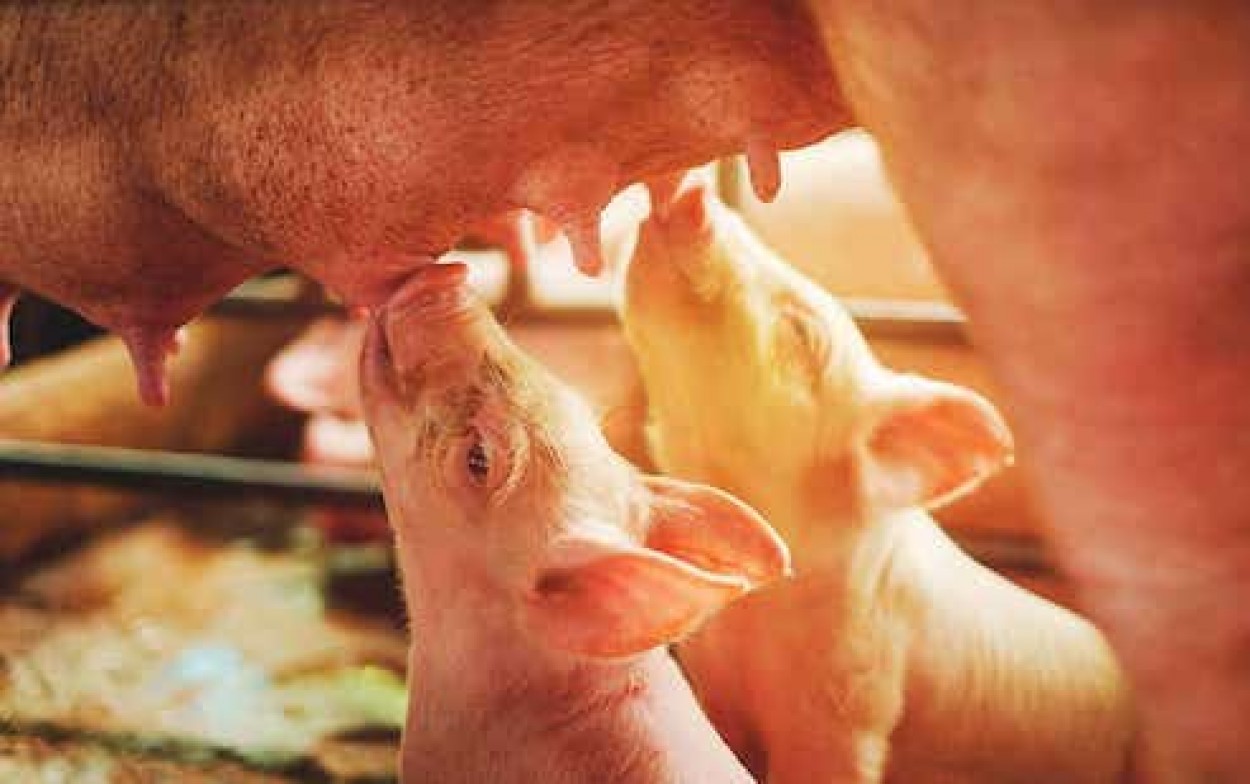 The most crucial time in a pig's life is when they are weaned. Diets containing growth-promoting antibiotics are routinely used in both the creep and weaner diets to help avoid issues with transitioning to a different diet after weaning. In-feed antibiotics, on the other hand, are banned in many countries due to growing evidence of antibiotic resistance in both animal and human microorganisms. In commercial pig production, therefore, antibiotic growth boosters may be replaced with prebiotics and probiotics, either alone or in combination (synbiotics) as feed additives.

The pig gut is home to a dynamic microbial population that forms a complex ecosystem with the host. This microbial population, also known as gut microbiota, has a major impact on the host's health. Pig's digestive, physiological, and immunological processes are all dependent on their gut flora. During pig rearing, disruptions in the gut microbial environment can significantly increase disease risk.

Gut microbiota and their importance

Microorganisms that exist in the digestive systems of mammals include bacteria and other single-celled organisms. However, the composition and function of a healthy microbial ecosystem must be described qualitatively before it can be exploited to improve animal health and performance. The gut microbiota has a variety of tasks that benefit the host, including glucose digestion and fermentation, vitamin synthesis, intestinal villi maintenance, immune response modulation, and pathogen protection. Different parts of the digestive system, such as the jejunum, ileum, and caecum, have different densities and a variety of gut microbiota, at different stages of development from piglets to adults. The variety and makeup of the gut microbiota in weaned pigs are mostly affected by dietary protein and fibre levels.

Disease-causing organisms such as E. coli, Salmonella, and Clostridia are also found in this microbial community. Antibiotics have been used prophylactically in animal sectors because these pathogenic organisms can cause significant morbidity and death. During the growth of pigs, disruptions in the gut microbial environment can drastically raise the risk of illness. Piglets are weaned early to fulfil production targets in the swine business before a stable microbial population has been established and the immune system has matured. Weaning stress affects the gut microbial environment, even more, raising the risk of bacterial post-weaning diarrhoea.

Prebiotics, such as fructooligosaccharides, protect the gut by decreasing the pH of the gut and raising the concentrations of butyrate in the cecum and colon. Among several new prebiotics identified, only inulin, fructooligosaccharides, transgalactic-oligosaccharides, and lactulose meet the requirements for prebiotic categorization. Dietary carbohydrates, wheat starch, and beet pulp have also been shown to enhance microbial fermentation and increase the number of beneficial Lactobacillus species in the small intestine. Traditional swine diets consist of cereal grains rich in fermentable carbohydrates such as resistant starch, -glucans, and hemicellulose. Mutualistic gut bacteria can exploit fermentable carbohydrates found in cereal grains as a source of Short-chain fatty acids (SCFA) for the host.

Short-chain fatty acids (volatile fatty acids) are the principal metabolites of gut bacteria fermentation, and they play an important role in gut health by reducing luminal pH and controlling the microbial populations. Extensive fermentation of undigested meal components by bacteria in the large intestine, such as the cecum, is responsible for toxic drug detoxification and the prevention of pathogenic bacterium colonisation.

It is hypothesised that dietary Lys limitation can have a significant impact on gut microbiota. Lys restriction improved the microbial community's concentration in the intestine, according to studies. Furthermore, other research suggested that the changed intestinal microbiota produced by Lys restriction may affect amino acid metabolism, membrane transport, endocrine system, glucose metabolism, as well as cellular signalling, replication, and repair.

Prebiotics and mannan-rich fractions (MRF) can be used in pregnant sow diets to maximise the levels of all Igs in the colostrum and the blood of the piglets that consume it. Feeding piglets with colostrum will assist in increasing the immunity in the body to have a firm foundation in adult life before adapting to a new diet regime. 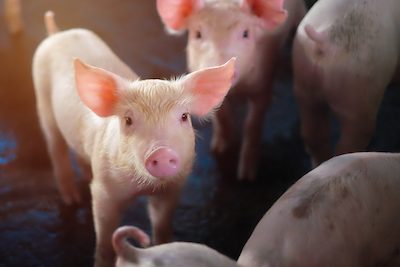 Factors that influence the gut microbiome

The colonisation and subsequent succession of microbial populations, the age of the pig and the environment it inhabits, antimicrobial agents, dietary composition, supplemental feed, feed processing, feeding methods, disease load, weaning, season, environment, stress, and genetics are all factors that influence the persity and activity of the gut microbiota.

Weaning is an important period of a pig's life.

In swine raising, weaning is usually started at the age of four weeks. Weaning is a difficult time for pigs. Weaning pigs experience nutritional, social, and psychological stress in commercial settings. As a result, sudden weaning is often followed by a reduction in feed consumption. Pigs' small intestine undergoes morphological and histological alterations as a result of weaning, leading to indigestion and malabsorption. The transition from milk to a solid diet can cause post-weaning growth depression in piglets. Feeding feed additives to nursery pigs may be a feasible approach for promoting development. These additives improve nutrient digestion, intestinal morphology, immunological state, and intestinal balance. A few of the feed additives and their role in improving gut health and improving the growth of piglets are discussed here.

Natural bioactive compounds generated from plants are referred to as essential oils. Aromatics are volatile, oily liquids collected from seeds, flowers, leaves, buds, twigs, herbs, bark, woodlands, fruits, and roots, among other sources. Carvocrol, thymol, citral, eugenol, and cinnamaldehyde are some of the essential oils that have been fed to pigs in various research investigations. According to many studies, feeding essential oils to piglets causes changes in the gut environment which encourage a healthy bacterial population.

Organic acids have the capacity to lower gastrointestinal tract pH, enhance nutritional digestibility, and suppress pathogenic bacterial development, Hence organic acids have been utilised to improve weanling pig health and growth performance. They  Organic decrease coliforms and an increase in Lactobacillus in newly weaned pigs, and they have a larger impact on microbiota composition from the stomach to the colon. Organic acids having short- and medium-chains, such as citric, propionic, lactic, and fumaric acids, have bacteriostatic and bactericidal capabilities and are used in large amounts in piglet diets for feed preservation.

Prebiotics in pig diets enhance beneficial bacteria growth and metabolism, resulting in a more stable microbial ecosystem. They are dietary fibre constituents that have been selectively fermented to allow changes in the makeup or activity of the gut microbiota. Volatile fatty acids (VFAs) such as acetic, propionic, and butyric acid are created during fermentation, lowering the gut pH. Animals use VFAs as a source of energy as well. According to studies, pathogenic bacteria including Salmonella, E. coli, and Clostridium do not multiply well in acidic environments. Butyric acid also increases the proliferation and differentiation of GIT epithelial cells, increasing the amount of surface area accessible for nutritional absorption.

Probiotics are living microorganisms that can be utilised to prevent and cure microbial imbalances by changing the populations of the gut microbiota. Lactic acid bacteria like Lactobacillus, Bifidobacterium, Enterococcus, and Streptococcus, as well as yeasts from the Saccharomyces group, are the most commonly utilised microbes.

Probiotic supplementation may have the following effects: (1) altering the intestinal microbiota, (2) stimulating the immune system, (3) reducing inflammatory reactions, (4) preventing pathogen colonisation, (5) improving growth performance, (6) changing the ileal digestibility and total tract apparent digestibility coefficient, and (7) lowering ammonia and urea excretion. As a result, probiotics might be a viable alternative to antibiotic growth promoters in pig farming. Probiotics work through a variety of mechanisms, including acidifying intestinal contents, adhering to intestinal epithelial surfaces to prevent pathogen attachment, competing for nutrients with pathogens, producing bacteria-toxins, and producing inhibitory substances like organic acids and hydrogen peroxide. Probiotics also increase immunological components such as IL and IgA. Lactobacillus produced from the gut of pigs is fed as a probiotic, which lowers the number of Enterobacteriaceae, especially pathogenic E. coli, reduces diarrhoea, improves immunological response during infection, and boosts weight growth. Suckling piglets from probiotic-fed sows might be a positive breakthrough in probiotic use.

By promoting microbial fermentation and boosting beneficial Lactobacillus species in the gut microbiota, dietary carbohydrates, wheat starch, and beet pulp can help maintain a stable and healthy gut microbial habitat. Traditional pig diets consist of cereal grains that naturally include fermentable carbohydrates such as resistant starch, glucans, and hemicellulose. Piglets on complex diets that replace wheat with barley have a more homogeneous mucosal microbiota and grow quickly after weaning.

In modern swine farming, early weaning and feed formulation techniques unintentionally disturb the gut microbial ecology, predisposing piglets to sickness. Weaning is a critical event in swine rearing because it causes gastrointestinal disorders, which may be costly and dangerous to the public's health.

Varicose Veins in a Buffalo

Adaptation to thermal stress in animals