The threat posed by wild animals encroaching into the farmer’s field, destroying crops, killing domestic animals like cattle, sheep, goat and many times poor human beings, particularly, the poor and hapless dairy farmers who venture out early in the morning to pour the milk into the collection centres of milk co-operative societies, is perhaps one of the greatest threats posed before the farmers in Animal Husbandry Sector, especially those living in the areas adjoining the forests.

Hence the following steps are suggested for counteracting the wild animal menace, so as to ensure that man and his livelihood/ sustenance, viz., domestic animals like cattle, sheep and goat, as well as the wild animals, live in perfect harmony:

1) Prevent forest encroachment – human beings should not encroach into the forest. The practice of letting cattle, sheep and goat out for grazing in the forest, should be stopped in right earnest.

2) Prevent wildfires – Forest fires cause huge devastations every year, in summer, destroying the natural habitat and vegetation of wild animals and birds. To prevent wildfires, creation of natural fire line, by planting fodder trees like Glyricidia, in the borders of the forests is found to be highly effective.

4) Construction of artificial barriers – Barriers in the form of fencing carried out with materials such as iron (steel rope fencing), steel rope connected to the solar panel (solar fencing), rail fencing using disposed of railway tracks and digging trenches are some of the measures by which the entry of wild elephants into human dwellings can be prevented. Of these, rail fencing though costly is found to be the most effective in warding off encroaching elephants.

5) Honey bee farming in areas adjoining the forests have been found to be effective in warding off elephants and other wild animals, as elephants once stung by the bees, will refrain from encroaching into that area, in future.

6) Radio collar the animals - This is carried out in case of elephants and tigers. The first time, these animals encroach into the human settlements they are caught, tranquillized and global positioning system (GPS) – enabled very high frequency (VHF) radio collars are applied around their necks; after which are then let out back into the forest. Once the radio-collared animal comes back to into the mainland, sensors will detect it and information can be passed on through SMS/ Whatsapp messages to the farmer’s mobile/ smartphones so that they can be alerted and simultaneously, the forest officials can also intervene. 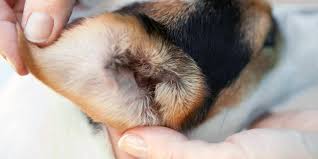 7) Construct water holes in the forest – Scarcity of drinking water in the forest is one of the prime reasons why wild animals encroach into the mainlands. So small ponds or check dams can be constructed inside the forests to provide water for the animals, which in turn will prevent their encroachment into human dwellings.

8) Application of ectoparasiticides on the bodies of animals grazing in areas near the forest will help to prevent tick infestation in domestic animals like cattle, sheep and goat; because ticks from the Haemaphysalis group, especially the species, Haemaphysalis spinigera, are believed to be the most common vectors of the highly pathogenic virus called Kyasanur forest disease (KFD) virus, a Flavivirus, which causes infectious bleeding disease in monkey and man, called as Monkey fever or KFD. Vaccination of human beings rearing animals and residing in the vicinity of the forest against KFD is an additional step to be carried out to prevent the occurrence of this fatal disease in man.

9) Sound of high decibels such as drumming jerry cans and tins is the traditional method used to ward off encroaching elephants. This method even though very cheap, is less effective nowadays, as elephants have got accustomed to such sounds and seem to enjoy it as music to their ears. The latest trend is to play songs in very loud sound in areas adjoining the forests or broadcast the pre-recorded, loud roaring sounds of enemies of the elephant, like a lion and the tiger.

10) Use of carbide gun- This is a farmer developed gun made of PVC pipe. Inside the pipe, carbide, an alloy of carbon, with a metal; is loaded along with small pebbles and pieces of paper. They are tightly packed inside the pipe and a small spark is provided from the outside using a gaslighter. The spark produces an explosion inside the pipe which is heard outside as a loud sound, similar to that of a gun being fired, which wards off invading wild animals like monkeys and deers, at the same time being harmless to them. Nowadays carbide guns made of galvanised iron (GI) pipes are also available. 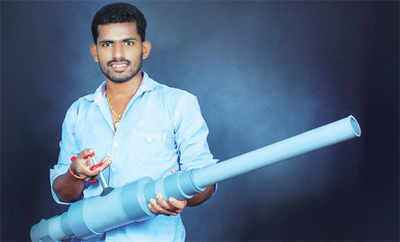 11) Application of nets – nets made of plastic or nylon, having less gap between the adjacent fibres, when put around vegetable crops, is an effective method of warding off, crop invaders, such as monkeys.

12) Rotten biowaste from the farms such as rotten and spoiled eggs, dead embryos and other hatchery waste; spoiled and foul-smelling fish; dried fish etc. which have a pungent odour, if applied in the areas adjoining the forests, will ward off the crop-raiding animals such as deer and monkeys. This has got the added benefit of enriching the soil fertility also, but care should be taken to ensure that there are no houses in the neighbourhood, or else it can lead to a complaint.

13) Hanging of lanterns which sway gently at night and hanging of old compact discs (CDs) from trees at day time, will help to drive away from the invading wild boars and pigeons; because light from these sources when flashed suddenly upon their eyes, will frighten and scare away these crop raiders.

14) Invasive species of plants like Senna spectabilis, which grows very fast and extensively in the forests; arresting the growth of useful forage plants and other vegetation, thereby further reducing the forage available for wildlife, is a recent problem. The only solution to this is to cut off and burn out such invasive plants before they encroach upon a large area of the forest.

15) Prevent the audacity of man – Audacious measures of man such as accidentally or purposefully throwing away the stumps of lit beedis and cigarettes and setting the forest ablaze, should be punished strictly. It is said that 99.99 per cent of the forest fires are manmade, caused purely due to the audacious acts of man.

16) Change the outdated laws – Outdated and impractical laws such as the one in Kerala stating that if a wild boar, seen attacking and destroying the crops, should be shot at only after getting approval from the concerned Divisional Forest Officer (DFO) are highly impractical, because the boar won’t wait till the arrival of the order to get himself shot at; should be disposed of, at the earliest.

17) Last, but not the least, strict observation of green protocol, in the forest by prohibiting the use of plastic and plastic by-products not only in the forests but also in the entire country, will be of immense benefit.

Assistant Professor and Head in Charge, Dept. of Animal Nutrition,