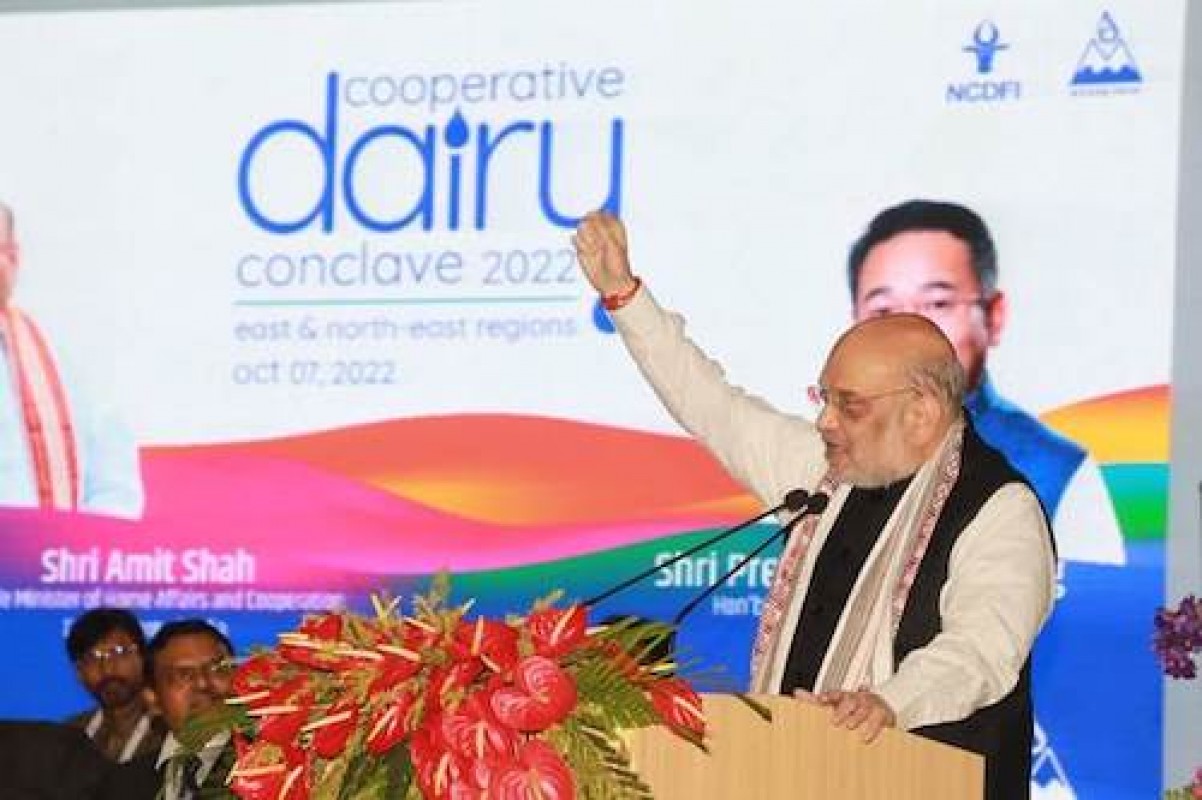 Milk production is the only way for women empowerment: Amit shah

The Union Minister for Home and Cooperation,  Amit Shah inaugurated the Eastern and North-Eastern Cooperative Dairy Conclave 2022 in Gangtok, the capital of Sikkim On the 7th of October. The conclave was organised by the National Cooperative Dairy Federation of India Ltd (NCDFI) in association with Sikkim Cooperative Milk Producers Union Ltd and in support of the Sikkim government.
Addressing the Conference, Union Minister Amit Shah said that milk production is the only way for women empowerment, poverty alleviation and doubling of farmer's income. He said that for centuries, animal husbandry has played a very important role in the social and economic development of India. Union Minister said that the Government of India has formulated several animal husbandry schemes and in the last 7 years the budget of Rs. 2000 crore has been increased to Rs.6000 crore.

In his address, Shah outlined the strengths, weaknesses, opportunities and challenges of our dairy sector.

Strength- Our strength is small landless farmers who still keep one to three cattle.

Weakness – Good breed of cattle. The Government of India is committed to the promotion and propagation of good breeds of animals so that we can overcome this weakness of ours.

He said that our second weakness in this sector is that almost 70% of the milk goes to the market in an unorganized way, due to which the farmer does not get its fair price. It is a weakness as well as a challenge that we should bring down the quantity of this 70% milk going into the market unorganized to 20.

Opportunity-  We have a huge opportunity to deliver milk to countries like Bhutan, Nepal, Bangladesh and Sri Lanka. To explore this world market, the government is setting up a multi-state cooperative, which will act as an export house.

He said that the domestic dairy market of Rs 13 lakh crore is also a big opportunity in front of us. The government is committed to increasing this market from 13 lakh crore to 30 lakh crore by 2027.

Challenge- He said that today we have a target to increase the number of two crore cattle rearers of the country to seven crores and to include them within the chain of cooperatives. If we are successful in achieving this goal then both women empowerment and poverty alleviation will get the necessary boost.

NCDFI chairman Mangal Jit Rai highlighted the intervention of the Government of Sikkim to support the cooperative dairy, especially for the introduction of special milk incentives to the milk producers of Sikkim, which has helped Sikkim get into a high growth trajectory and NCDFI is looking forward to a brighter cooperative dairy movement across East and Northeast of India.

The awards were given by Union home and Cooperation Minister Amit Shah in the presence of Sikkim Chief Minister Prem Singh Tamang, and NDDB Chairman Meenesh Shah, among others.