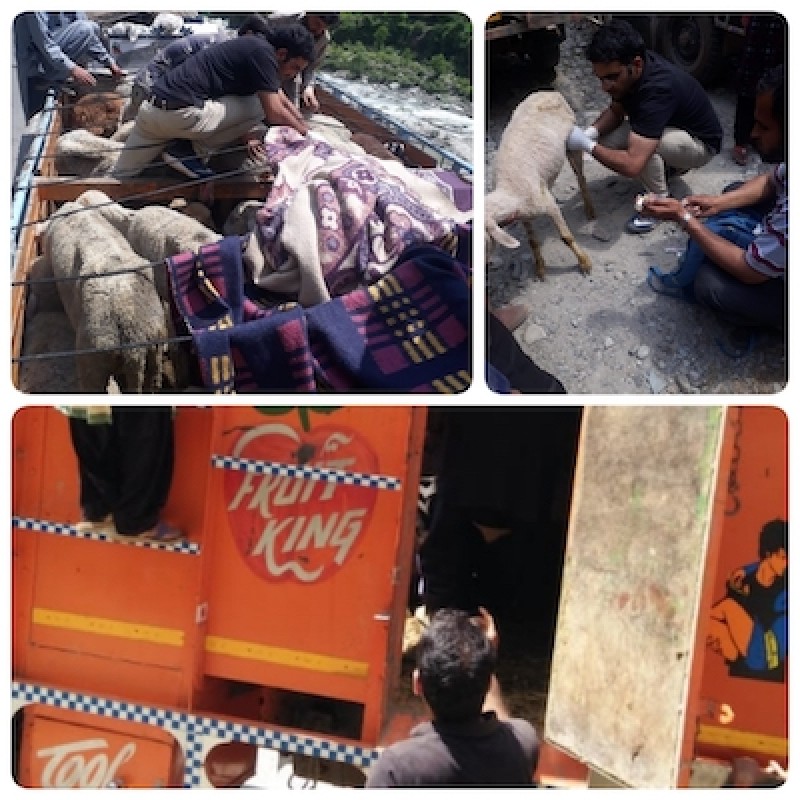 Thousands of vehicles are stranded on the highway following landslides at Digdol Ramban for last 4 to 5 days. Among them are 100 plus trucks carrying livestock to Kashmir Valley in preparation for forthcoming Eid Festival. Thousands of sheep goats were tortured to death, Packed like peas in a pod, 200 plus sheep loaded in a double-tiered truck, without food and water neither space enough to sit, died of hunger thirst and exhaustion.

Principal Secretary Animal and Sheep Husbandry Dr Asgar Samoon was approached by the Activists and due to his interventions, directions were sent through IG traffic to try and move these livestock trucks to places near water sources and ask them to unload. When the trucks have opened the scene was heartbreaking and horrifying and pictures received from there showed the sad end of poor animals some of them were even too small to have been loaded for slaughter.

As per Transport Rules 2009 every sheep, goat weighing more than 30 kg, it should be given at least 0.27 Sq mtrs area and if weighing more than 40 kg, it should have 0.32 Sq mtr space to itself. But our State of J&K has not adopted and enforced these rules despite many representations. Letters, emails were given to various concerned officials bore no fruits as this meat mafia does not want to let these rules implemented as it will eat into their profits. Thus Government of J&K allows the violators to stuff more than 140 sheep-goat in an average size truck, which would not allow freedom of movement to these poor souls nor they can be given food and water at every 8 hours interval as per the prevention of cruelty to animals and FSSA guidelines. These Trucks are literally Death traps/torture chambers for these voiceless souls.