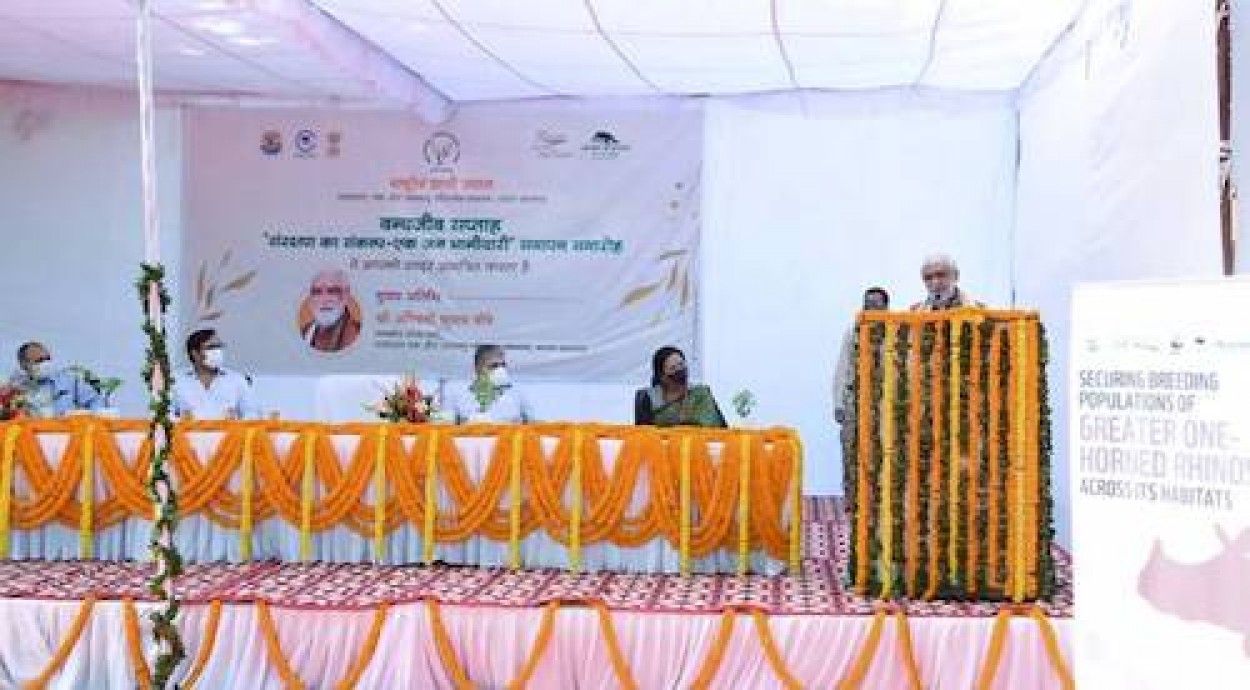 The valedictory ceremony of the Wildlife week which is being celebrated under the theme ‘संरक्षण का संकल्प – एक जन भागीदारी (a conservation collective)’ was held at National zoological Park Delhi. Shri Ashwini Kumar Choubey, Union Minister of State Ministry of Environment Forest and Climate Change presided over the function.  On the occasion, the union minister released a Black kite fitted with a satellite tag for research purposes being undertaken by the Wildlife Institute of India. The data will help understand the migratory patterns for the species. Shri Choubey also interacted with the children who were participating in the on-the-spot competition and also gave away prizes to the winners.

Wildlife week 2021 saw a multitude of activities has been undertaken in collaboration with civil society organizations, academic institutions thereby making wildlife conservation participatory with universal acceptance. These conservation awareness activities have also been in sync with the ongoing Azadi Ka Amrit Mahotsav campaign titled ‘Conservation to coexistence: The people connect’.

The union minister also visited the new arrivals (3 sub-adult Asiatic lions (1 male:2 female) as received from Sakkarbaug Zoological Park, Gujarat. As this was the occasion of auspices Navratri Shri Choubey also named them as Maha Gowri & Shailja- the two females, and the male as Maheswar. He participated in the plantation of native tree species of Gujarat Gir landscape near the lion enclosure and planted a Kanak Champa (Pterospermum acerifolium) tree.

Shri Choubey also visited the enclosure wherein the tigress (2 females approx. 4 years) have been brought in from the wildlife rescue centre, Gorewada Maharashtra. Both the females were rescued from the Bhramapuri forest di-vision in Chandrapur District and shall support the Conservation breeding plan for Bengal tigers at NZP. The Minister named the Tigresses Aditi and Siddhi.

Currently, the zoo houses one pair of Tiger (Male – Karan of 8 years and Female – Barhkha of 6 years) and one pair of Asiatic Lion (Male – Sundram of 12 years and Female – Hema of 7 years). Transporting the animals safely is an arduous task and requires meticulous planning and preparation. Two Sloth bears approx. 3 years (male) and 2 years (female) have also been received from WRC, Gorewada and 1 female Chausinga, 1 lady Amherst’s pheasant and 3 Red Eared sliders have also been received as part of the exchange from Shakkarbaug Zoological Park, Gujarat.

At the beginning of the wildlife week, the zoo launched online (Poster and painting) competitions for which entries have been received. Expert Talks that focused on the Himalayan landscape were conducted by inviting scientists and professors from colleges in Delhi. A unique, name the animal contest is ongoing on social media, where the youth can vote for names chosen for the favourite animal. The names will help provide positive reinforcement and greater bonding with the animal keeper and the animal.

The Zoo also launched Zoomania- crowdsourced insects and butterfly campaign from today in which all visitors to the zoo can just take a photo and upload it with the location. It is expected that a checklist of butterflies and insects will be developed using this initiative.

Delhi zoo is spread across 188 acres and is surrounded by 3 UNESCO World heritage sites, it is iconic as it supports over 200 varieties of trees, 95 species with 1200 inpiduals of animal species in large scientifically designed enclosures making it truly the green lungs for the national capital. The zoo also received CSR support from Reliance foundation wherein 2 Isuzu Trucks, 2 Battery-operated carts and a Mobile X-ray unit were donated for better animal and health upkeep at the zoo.