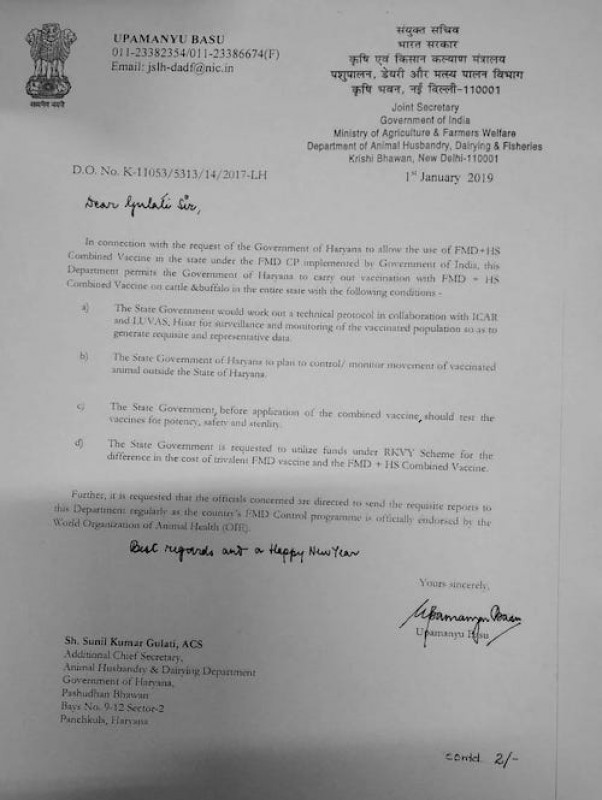 Haryana becomes the first State of India to undertake FMD+HS (Foot and Mouth Disease + Hemorrhagic Septicaemia) combined vaccination program under FMD CP implemented by the Government of India. A permission letter in this regard was issued by Joint Secretary Ministry of agriculture and Farmers Welfare, GOI on 01 January 2019.

The letter was issued in response to the request made by the Haryana Government in this regard.  Haryana Government has been given the permission to carry out vaccination with FMD+HS combined vaccine on Cattle and Buffalo with conditions which include working out a technical protocol in collaboration with ICAR and Lala Lajpat Rai University of Veterinary and Animal Sciences (LUVAS) Hisar, for surveillance and monitoring of the vaccinated population to generate authentic and representative data. State is also advised to test the potency and safety of the vaccine before administration and also monitor the movement of the vaccinated animals outside the State.

Implementation of FMD+HS combined vaccination program in Haryana is the apparent victory for the Pashu Chikitsak Mahasangh (PCM) an apex body representing the Vets from all over the India. PCM under the able leadership of its Chairman Dr Chirantan Kadian was continuously pushing its demand for the use of combined vaccination which as per PCM would not only bring down the overall cost of the FMD CP program but will also improve the Veterinary services being provided by the Veterinary doctors.