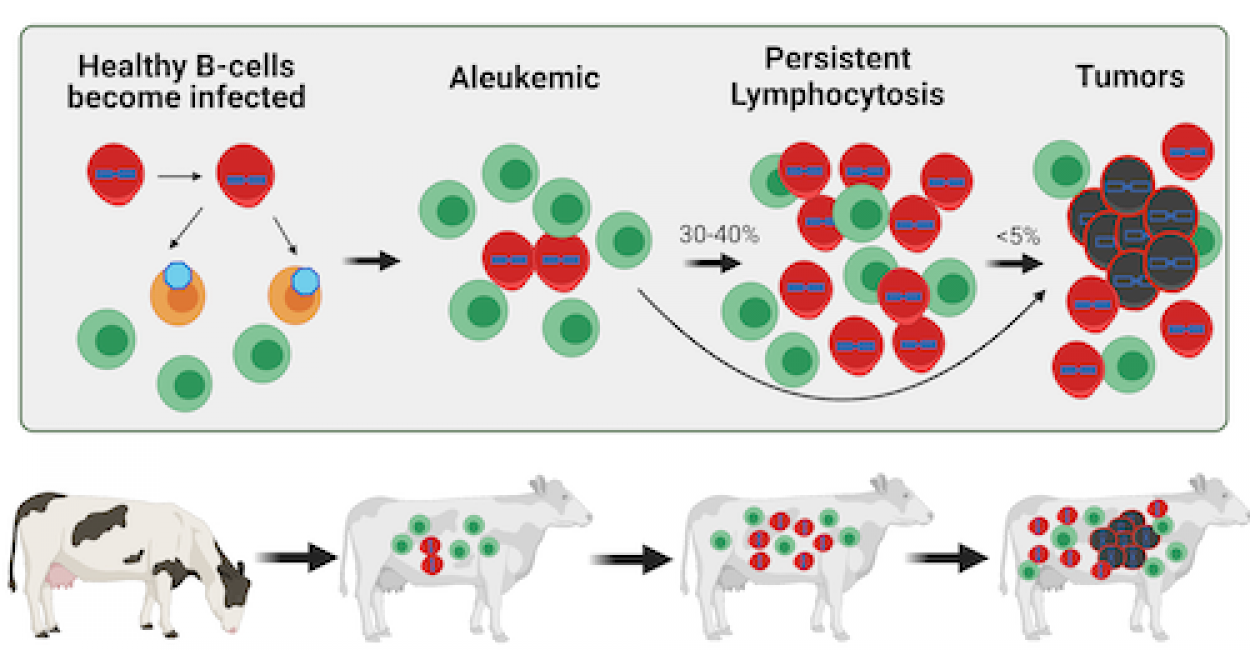 Bovine leukemia virus (BLV): A Silent cause of immune suppression in cattle

Bovine leukaemia virus (BLV), a deltaretrovirus, is endemic in herds worldwide and causes B-cell leukaemia/lymphoma in cattle. The human T-lymphocyte leukaemia viruses 1 and 2 are closely related to it. When bovine leukosis (B-cell leukaemia/lymphoma) was first recognized in Lithuania in 1871, it was assumed to be an infectious disease because it was spread through cattle herds. Bovine leukosis was first discovered to be caused by a virus isolated from cattle cultured lymphocytes in a sick herd. There are herds of cattle around the world that have BLV. Approximately 38% of the beef herds, 84% of the dairy herds, and 100% of the herds at large-scale dairy operations in the United States are all affected. The productivity and health of infected cows are significantly impacted by BLV infection because it impairs immune system performance and causes other disorders. The majority of infected calves do not exhibit any overt clinical symptoms, while about 30% develop persistent lymphocytosis (PL) and about 5% succumb to malignant lymphoma as a result of BLV infection. BLV primarily affects peripheral blood lymphocytes and monocytes, impairing immune system performance, increasing susceptibility to various infections, and heightening disease severity, all of which have an impact on cow culling rates, milk output, and milk quality.

BLV doesn't generate persistent viremia, has a stable genome, and doesn't have a favoured location for proviral integration. The tumours the virus causes in a single person are often monoclonal and have a single integration site despite the lack of favoured proviral integration sites. Low levels of viral replication let the virus evade the immunological reaction. Although the mechanism is not well understood, it appears that transcriptional level replication is prevented. BLV transmission is typically horizontal. It is believed that close contact between BLV-negative and BLV-positive cattle poses a risk. Numerous routine agricultural procedures, like tattooing, dehorning, rectal probing, injections, and blood collection, have been linked to the spread of viruses. The virus can also be spread by vectors like tabanids and other big biting flies. Vertical transmission can happen intrapartum through contact with infected blood, transplacentally from an infected mother to the foetus, or postpartum from the dam to the calf through consumption of infected colostrum. Animals could contract BLV from any substance that is lymphocyte-rich or tainted with blood. The most frequent and accurate method for determining BLV infection is serology. Although ELISA is the most popular test for regular diagnostic use, agar gel immunodiffusion is still the official import/export test for the majority of nations. Viral infections and lymphosarcoma in cattle cannot be treated, while parenteral corticosteroids can momentarily lessen the severity of clinical symptoms.

Even though some viruses are not particularly dangerous on their own, they can still kill an infected animal when they co-infect with BLV. The BLV infection impairs various functions of uninfected cells as well as the cellular function of both the nonspecific and specific immune systems. The polymorphonuclear neutrophil (PMN), which has a short lifespan and nearly constant circulation numbers, is a key component of the body's natural immune system. After the virus invades, PMN is the first immune cell to be sent to the infection site. It interacts with other immune cell types to produce chemokines, cytokines, reactive oxygen species (ROS), and neutrophil extracellular traps, which are released as part of the antiviral immune response (NETs). Bovine retrovirus infection causes immune suppression and increases an animal's susceptibility to various infections, which can sometimes result in the death of the affected animal. The BLV infection had no discernible impact on the phagocytosis of PMN but significantly inhibited their migration and respiratory burst function. Such effects were closely related to the BLV provirus load. It is necessary to appraise the numerous facets of bovine retroviruses, which are yet unknown.

METHODS OF PREGNANCY DIAGNOSIS IN SOWS