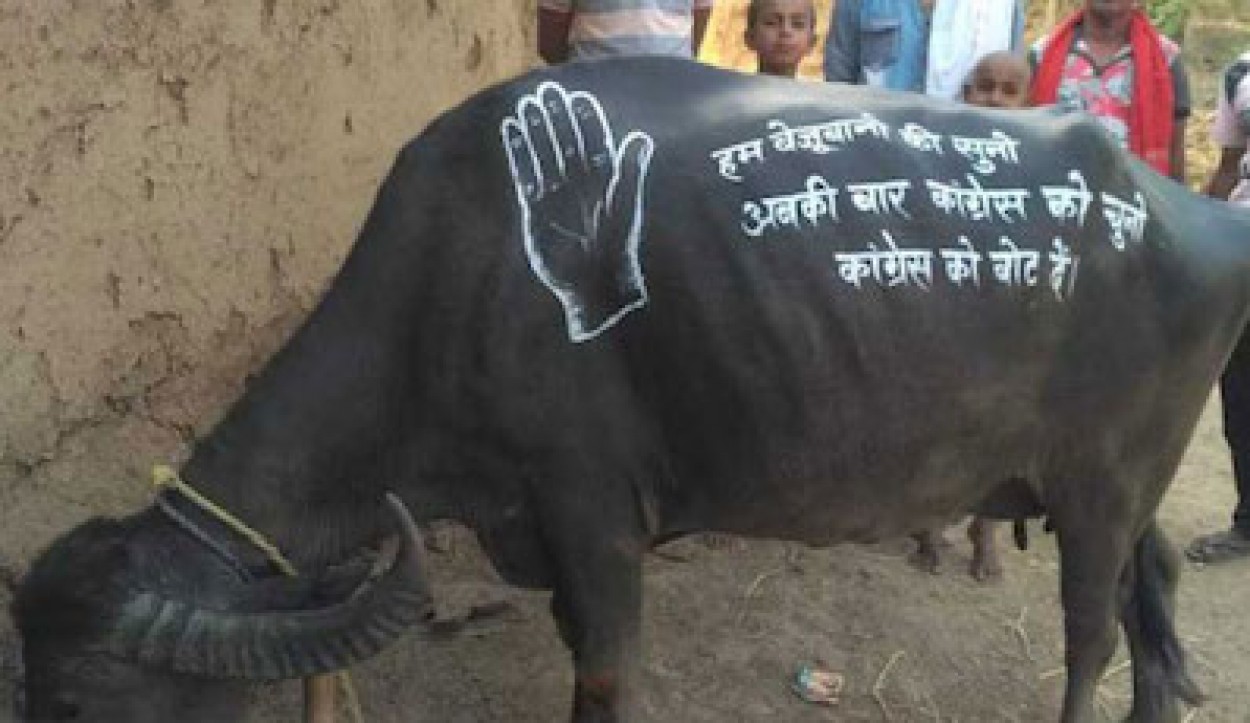 Pashu Sandesh, 17th April 2019
Its Lok Sabha election time in India and every Party is doing everything as per their understanding to attract the attention of the Voters even at the risk of violation of Model code of conduct guidelines issued by the Election commission.

In the Kawardha district of the Chattisgarh, some youth painted an appeal on the Buffalo along with Congress party symbol as part of the canvassing for the Lok Sabha elections scheduled on 18th April. In the appeal which is apparently made from the side cattle asking to listen to dumb Animals and vote for the Congress. Little they knew that this act by the enthusiastic party workers is a direct violation of code 22.5 of the manual issued by the Election commission as part of Guideline for the Moral code of Conduct.

Code 22.5 states “ The Election Commission has advised the political parties and candidates, to refrain from using any animal for election campaign in any manner. Even a party, having reserved symbol depicting an animal should not make a live demonstration of that animal in any election campaign of the Party/any of its candidate.”

These things happen when parties fail to percolate the message of the Election Commission to the grass root workers and in the process risk severe reprimand from the commission. Already Animal activist groups such as PETA and others have issued warnings against the incident. Party workers however who have done this claim innocence and in fact were hopeful that Election Commission would be happy to note that no money was spent for the campaign. State Congress Chief Spokesperson has denied the knowledge of any such incident and as a coverup demanded strict action against the preparatory elements.

Pashu Sandesh strictly condemns any such incident on the use of Animal for canvassing and otherwise. Parties are as such leaving no stone unturned to reach out to the Voters but are failing miserably to discipline their own workers.