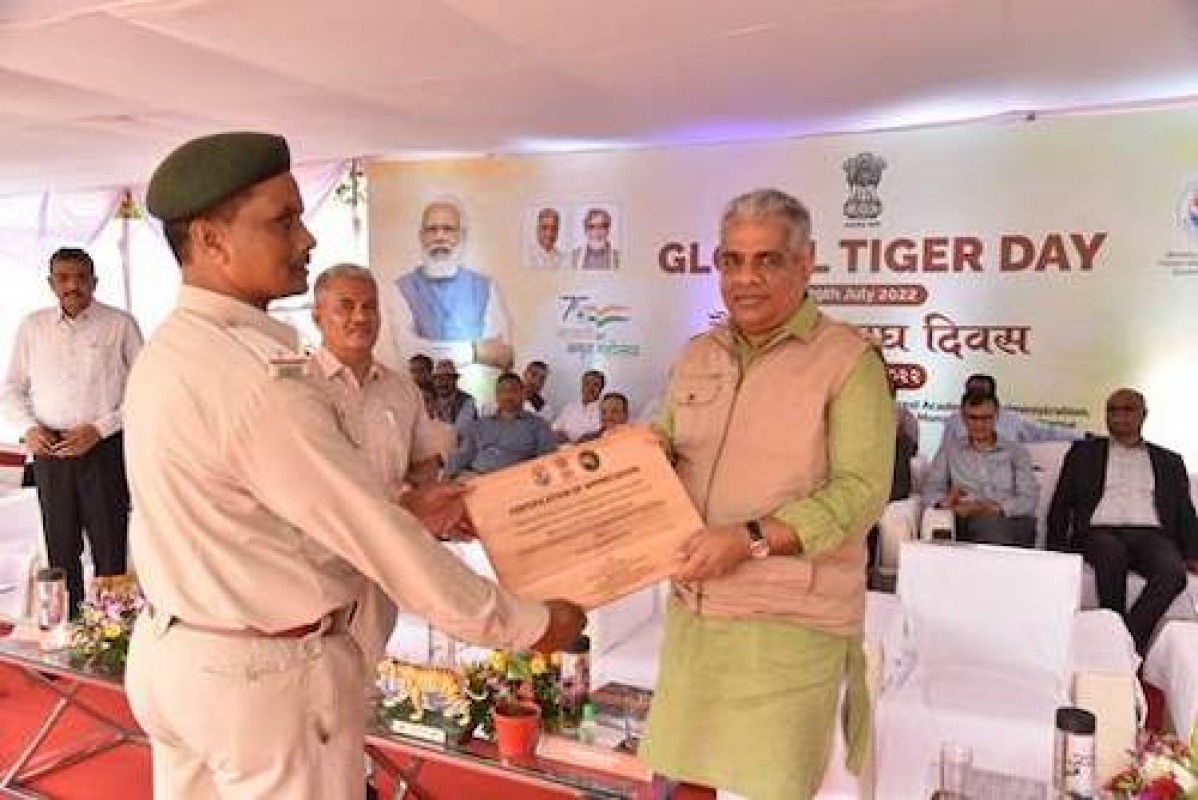 The Ministers, along with other delegates, visited Tadoba Andhari Tiger Reserve (TATR) and appreciated the persity of the landscape, its flora and fauna and had informal interactions with the forest staff & tiger reserve management to understand the field level protection issues.

Tadoba Andheri Tiger Reserve has a landscape with a high density of tigers that co-exist with the local population. Yadav was deeply appreciative of the dedication of the staff in carrying out enforcement activities, especially the mobile application-based smart patrolling called MSTRIPES. He also appreciated the unique community-based ecotourism model which is providing livelihood opportunities to the locals and has helped win support for the reserve.

Bhupender Yadav congratulated all tiger range countries and commended India in particular for setting a benchmark in conservation for having & protecting more than 70% of the global tiger population. He said that the Government of India has demonstrated its commitment to tiger conservation by increasing the number of tiger reserves from an initial nine in 1973 to the current 52, the latest being Ramgarh Vishdhari in Rajasthan.  The government is committed to the well-being of the people who inhabit these tiger-bearing landscapes through the creation of various livelihood opportunities and interventions. He commended Maharashtra for implementing the unique Shyama Prasad Mukherjee Jan Van Vikas Yojana which provides for schemes for the welfare of people living in and around tiger reserves and is worth emulating by other states.

To avoid complacency, an unbiased, independent, management effectiveness evaluation is conducted quadrennially involving outside experts in the wildlife conservation and also the All India Tiger Estimation once in four years and is currently being carried out for the fifth time, the Minister shared. He mentioned with pride that this unique exercise done in 2018 has entered the Guinness Book of World Records. He emphasized promoting low-impact sustainable tourism in Tiger Reserves with maximization of visitor satisfaction and direct benefit sharing with locals. He shared that India has taken up a high-priority conservation project to bring back cheetahs which went extinct in 1952 by embarking on a cheetah introduction programme which is at an advanced stage of implementation. The bilateral agreement with the Namibian Government is already signed and the MoU with South Africa will be signed soon. He appreciated all the field staff for the commitment shown to tiger conservation which has put the country in the number one position globally.

Ashwini Kumar Choubey stressed that the tiger symbolises power, and plays a crucial role in the conservation of biopersity, forest, water and climate security. He stated that it is a matter of great pride that India is a global leader in tiger conservation and is collaborating with countries like Cambodia, China, Bangladesh, Bhutan, Nepal, Myanmar and Russia for coming together for the cause of tiger conservation.  We should imagine a future of peaceful co-existence of man, animal and nature, said the MoS.

Front line staff were felicitated and rewarded with NTCA annual award of Rs 1 lakh each to two Foresters, two Forest Guards and two Watchers/protection assistants/ Tiger Trackers by the Hon’ble Minister in recognition of their extraordinary performance in the field of tiger conservation, as a part of the celebrations.

The event was also attended by local public representatives, Field Directors of the Tiger Reserves in the Country and Senior Forest Officials from the State of Maharashtra besides the contingent of the Special Tiger Protection Force from Maharasthra and Kerala.

The declaration to celebrate Global Tiger Day was taken on 29th July 2010 at St Petersberg in order to bring all tiger range countries together for increased thrust on tiger conservation and management globally. Since then this day is symbolically celebrated as Global Tiger Day.