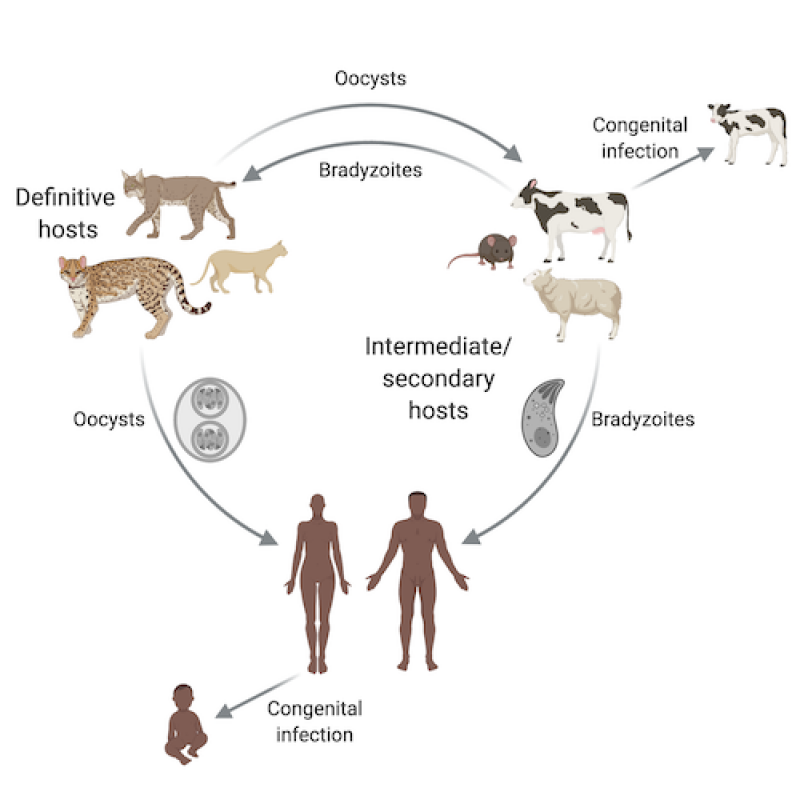 Toxoplasmosis is an infection caused by Toxoplasma gondii. The Toxoplasma parasite can persist for long periods of time in the bodies of humans (and other animals), possibly even for a lifetime. Those who are infected, however, very few have symptoms because a healthy person’s immune system usually keeps the parasite from causing illness. However, pregnant women and indi-viduals who have compromised immune systems should be cautious; for them, a Toxoplasma infection could cause serious health problems. It can be found in cat faeces and undercooked meat, especially lamb and pork. It can also be transmitted through contaminated water. Toxoplasmosis can be deadly or cause serious birth defects for a foetus if the mother becomes infected. Most people who have toxoplasmosis never have any symptoms at all. According to the Centres for Disease Control and Prevention (CDC), over 60 million people in the United States are infected with the parasite. The people who are most at risk for serious infections are those with compromised immune systems and infants born to mothers with active infection during their pregnancy.

These symptoms can last for a month or more and usually resolve on their own. Toxoplasmosis is especially serious for people who have weakened immune systems. These people are at risk of developing:

When a foetus is infected, the symptoms may be mild or quite serious. Toxoplasmosis in an unborn baby can be life-threatening for the baby soon after birth. Most newborns with congenital toxoplasmosis may appear normal at birth but can develop signs and symptoms as they age. It’s particularly important to check for involvement in their brain and eyes.

Transmission: It can be transmitted from contaminated meat that’s raw or not thoroughly cooked. It can also be transmitted by drinking contaminated water. In rare cases, toxoplasmosis may be transmitted through a blood transfusion or a transplanted organ. The parasite can also exist in faeces. This means it can be found on some unwashed produce that has been contaminated with manure. Although T. gondii is found in nearly all warm-blooded animals, cats are the only known hosts. This means that the parasite’s eggs only reproduce sexually in cats. The eggs exit the feline’s body through excretion. Cats don’t usually show symptoms of toxoplasmosis even though they’re hosts.

People become infected with toxoplasmosis only if they ingest the parasite. This could happen when being exposed to contaminated cat faeces. Pregnant women have an increased risk of passing toxoplasmosis to their unborn child in this manner. The parasite isn’t infectious until one to five days after its shed. In India, the most common way to get infected with the toxoplasmosis parasite is by eating raw meat or unwashed fruits and vegetables.

Prevention: Humans can be prevented from Toxoplasmosis by:

Pregnant women should have someone else clean the cat litter box during their pregnancy.

Treatment: If the disease is severe and persistent and involves the eyes, or involves the internal organs, then treated with Pyrimethamine (Daraprim) and Sulfadiazine. Pyrimethamine is also used to treat malaria. Sulfadiazine is an antibiotic. For immune-compromised patients, extra multivitamins are required. If the patient is pregnant then treatment will depend on whether the unborn child is infected and the severity of the infection. Most likely, a patient will be prescribed an antibiotic according to how far along in pregnancy to reduce the likelihood of transmission to the foetus. An antibiotic called Spiramycin is generally recommended in the first and early second trimester. A combination of Pyrimethamine/Sulfadiazine and Leucovorin is generally used during the late second and third trimesters.

The Causes and Management of Diarrhoea in Poultry

ESSENTIALITY OF FEEDING OF BYPASS FAT SUPPLEMENTS IN ANIMALS