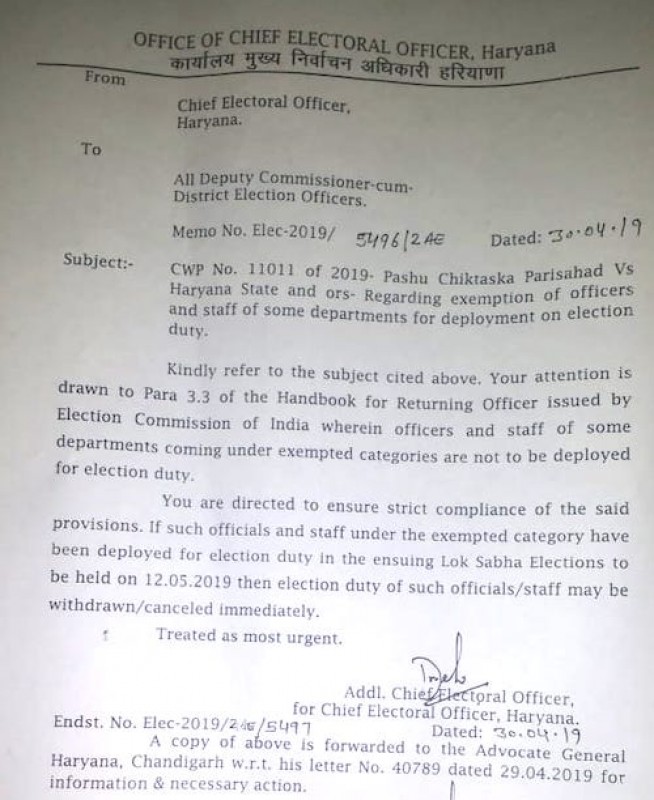 This order by the CEO was issued in the wake of the petition filed by the Pashu Chikitsak Parishad (PCP) an affiliated body of Pashu Chikitsak Mahasangh (PCM) which is an apex body of the Vets of India, in the Punjab-Haryana High Court against the deployment of Vets of Haryana in the Election Duties. High Court had asked the State Government to file an answer in this regard. Next phase of elections are due on 12 May 2019 on all seats of Haryana. Final hearing of the case is on 9th May.

The case is filed by the PCP in Punjab-Haryana High Court on behalf of the Veterinary Surgeons while pointing towards the non compliance of the order of Election Commission of India. The serious view taken by the High Court on this issue could set an example for other States where the Officers from the exempted list are often deployed for the Election Duties.

Pashu Chikitsak Mahasangh in the past too has taken up issues of the Vets, which are of National importance and thereby truly playing its role as an apex body of the Vets. Hopefully other State Electoral Officers would follow the lead and withdraw Veterinary Officers from present and future elections duties and important work of treatment of Animals would not suffer.