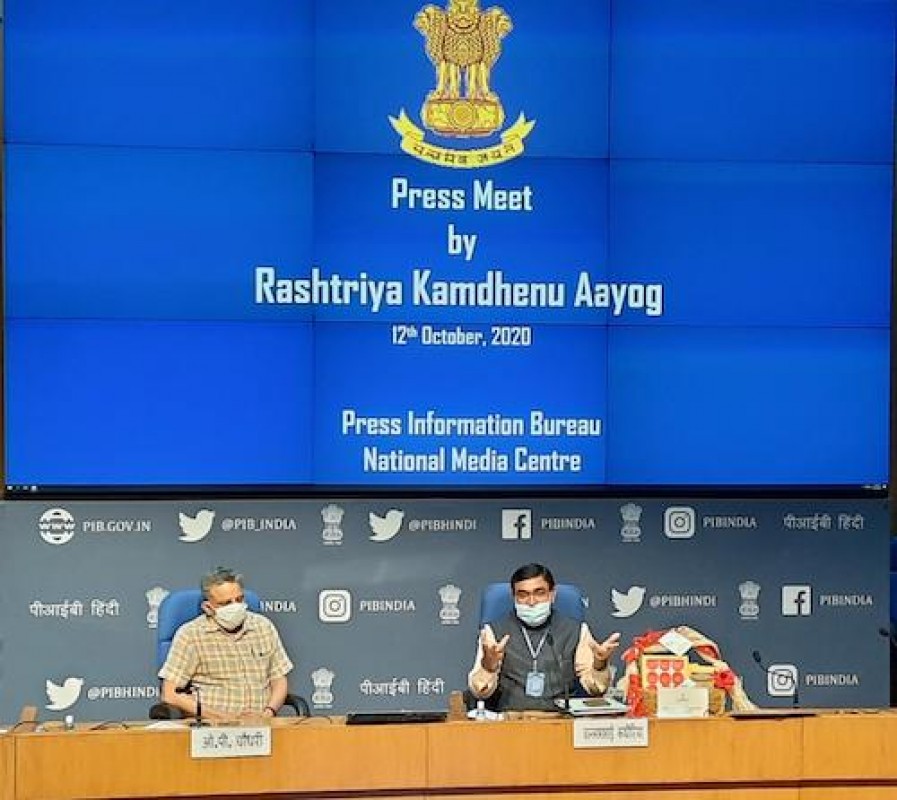 Encouraged by the response to  Gaumaya Ganesha Campaign, Rashtriya Kamdhenu Aayog's nation-wide campaign to celebrate Gomay Deepak-“Kamdhenu Deepawali Abhiyan” Rashtriya Kamdhenu Aayog (RKA) has been constituted by our visionary Prime Minister Sh. Narendra Modiji for the conservation, protection and development of cows and their progeny and for giving direction to the cattle development programmes.

RKA is a high powered permanent body to formulate policy and to provide direction to the implementation of schemes related to cattle so as to give more emphasis on livelihood generation. Livestock economy sustains nearly 73 million households in rural areas.RKA is trying to its best to implement the vision of our popular PM Sh. Narendra Modi for 'ATMA NIRBHAR BHARAT'.  In our view, the Cow-centric economy can also help in achieving this goal by making its own humble contribution.

For this purpose, RKA has been consistently endeavouring to increase the use of various cow-panchgavya products to raise the income of farmers, go-palaks, youth, women, self-help groups and other stakeholders. Recently, the RKA had launched a nation-wide campaign on various platforms of social media to use eco-friendly material in the manufacture of idols of Lord Ganesha for this year’s  Ganesha Festival on appeal of our Hon PM Shree Narendra Modi. It generated considerable interest in various stakeholders like dairy farmers / unemployed youth/women and young entrepreneurs / Gaushalas/ Gopalaks / Self Help Groups etc.

Encouraged by the response to our  Gaumaya Ganesha Campaign, RKA has started a nationwide campaign to celebrate   “Kamdhenu Deepawali Abhiyan” this year on the occasion of Deepawali festival. In this campaign, RKA is promoting the use of cow-dung/ Panchgavya to be used extensively during this Diwali Festival. Manufacture of Cow dung based Diyas, Candles, Dhoop, Agarbatti, Shubh-Labh, Swastik, Samrani, Hardboard, Wall-piece, Paper-weight, Havan samagri, Idols of Lord Ganesha and Lakshmiji for this year’s Diwali festival has started.

RKA has aimed at reaching 11 crore families to ignite 33 crore diyas made of cow-dung during this year’s Deepawali festival. we are happy to announce that feedback we have received till now is very encouraging and approximately 3 lac diyas will be ignited in the holy city of Lord Ram's Ayodhya alone, 1 lac diyas will be lit in the holy city of Varanasi.  Many more cities, towns and villages and crores of houses will be lit by this diyas.

Apart from generating business opportunities to thousands of cow-based entrepreneurs/farmers/ women entrepreneurs, the use of cow-dung products will lead to a cleaner and healthier environment. It will boost up in making Gaushals Atma Nirbhar too. Rejecting China made Diyas, the campaign will boost up Make in India concept of Hon'ble  PM and swadeshi movement.

RKA has been interacting with various stakeholders through a series of webinars to focus and promote the use of cow-dung in the manufacture of items that can be used in this year’s Deepawali. RKA has enhanced its presence through their representatives in every district of all States this time for the campaign to motivate and facilitate the production of Kamdhenu Deepawali related items in Gaushalas all over the country along with nationwide marketing plan.

Various segments of stakeholders like farmers, manufacturers, entrepreneurs, gaushalas and other concerned are being involved at large to make the campaign of Kamdhenu Deepawali a grand success. Why the urgent need to give attention to this sector,  this question is being asked often. I would like to draw attention to this fact. Even though, the country is the largest producer of milk, the average milk yield in India is only 50% of the world average.

The low productivity is largely due to deterioration in genetic stock, poor nutrition and unscientific management. The trend needs to be reversed and popular perception about the cow and cow-based agriculture and cow-based industry need to be corrected immediately for social and economic rejuvenation of society particularly poor in rural areas. ( Submitted By Dr R B Chaudhary, Former Editor &  Media Head, AWBI, Govt. of India)

DAHD and MoFPI to work for sustainable development of rural poor