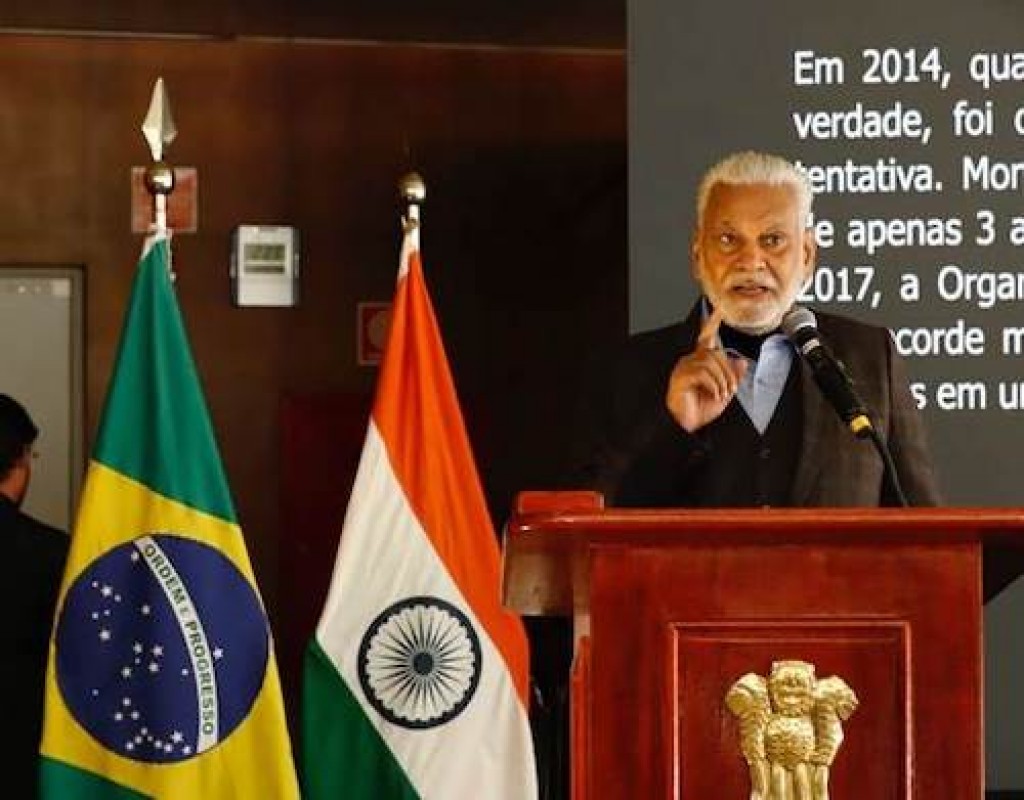 India signed MoU with Brazil for cooperation in Animal Husbandry

Parshottam Rupala, Union Minister of Fisheries, Animal Husbandry and Dairying visited Brazil from 16th to 20th May 2022 at the invitation of the Agriculture Minister of Brazil and led a delegation composed of experts from the animal husbandry and dairying sector and representatives of the private sector.

Rupala held meetings with Presidents of the Brazilian Association of Zebu Breeders (ABCZ), the Mayor of Uberaba, the Brazilian Confederation of Agriculture and Livestock (CNA), and the Brazilian Cooperatives Organization (OCB) and discussed ways to increase cooperation in the dairy sector through R&D, genetic improvement, and trade & investment.

During the Presidential visit of H.E Bolsonaro in January 2020, Brazil, for the first time in its history, signed 15 MoUs and agreements with a country and decided to widen cooperation in various areas including animal husbandry and dairying, oil and natural gas, bioenergy, ethanol, trade & investment, and many more.

During President Bolsonaro’s visit to India, a Joint Declaration of Technical Cooperation between the National Dairy Development Board (NDDB) and Brazilian Zebu Breeders Association (ABCZ) was signed. In Uberaba, the Minister visited the Zebu Museum and saw the four cutting edge cattle genomics and embryo laboratories viz ZebuEmbryo, ABS Semen and Embryos Central, General Embryos Central, and Alta Genetics Semen Central. He commended their work and welcomed their interest in enhancing cooperation for mutually beneficial partnerships in the areas of animal husbandry and allied sectors.

An MoU was signed in 2016 between the Department of Animal Husbandry and Dairying (DAHD) and the Brazilian Agriculture Research Corporation (EMBRAPA). In this context, the Minister visited the Embrapa Cattle Dairy (Embrapa Gado de Leite) research centre in Juiz de Fora and stressed the need for early finalization and to implement a work plan under the MoU. Training of Indian professionals in Brazil in IVF technology and identification of Brazilian companies to take up IVF embryo production in India are the key activities being identified in the work plan.

In Brasilia, the Minister participated in the curtain-raiser event for celebrations of the International Day of Yoga 2022 in Brazil and interacted with a large number of Brazilian Yoga teachers.  To promote Ayurveda, the Minister launched an Ayurveda comic book “Professor Ayushman”, translated by the Embassy of India in partnership with Brazilian Ayurveda expert Dr Jose Ruguê. He interacted with various high-level dignitaries from the public and private sectors.

As part of the 75 years of Independence of India, the Embassy is organising a space exhibition at the Brazilian Planetarium from 21 May to 10 June 2022 to showcase the advances by the Indian Space Agency ISRO. The Minister inaugurated the space exhibition on 20th May 2022.

The minister visited the facilities of UPL Ltd, an Indian multinational company that manufactures and markets agrochemicals and also offers crop protection solutions.  During the visit, the Minister was accompanied by Dr B Arun Prasad, Director, Central Frozen Semen Production and Training Institute and Dr Neelesh Nayee, Senior Manager, Animal Breeding National Dairy Development Board among other members of the delegation.

Govt to provide support to Dairy Farmers affected during Lockdown