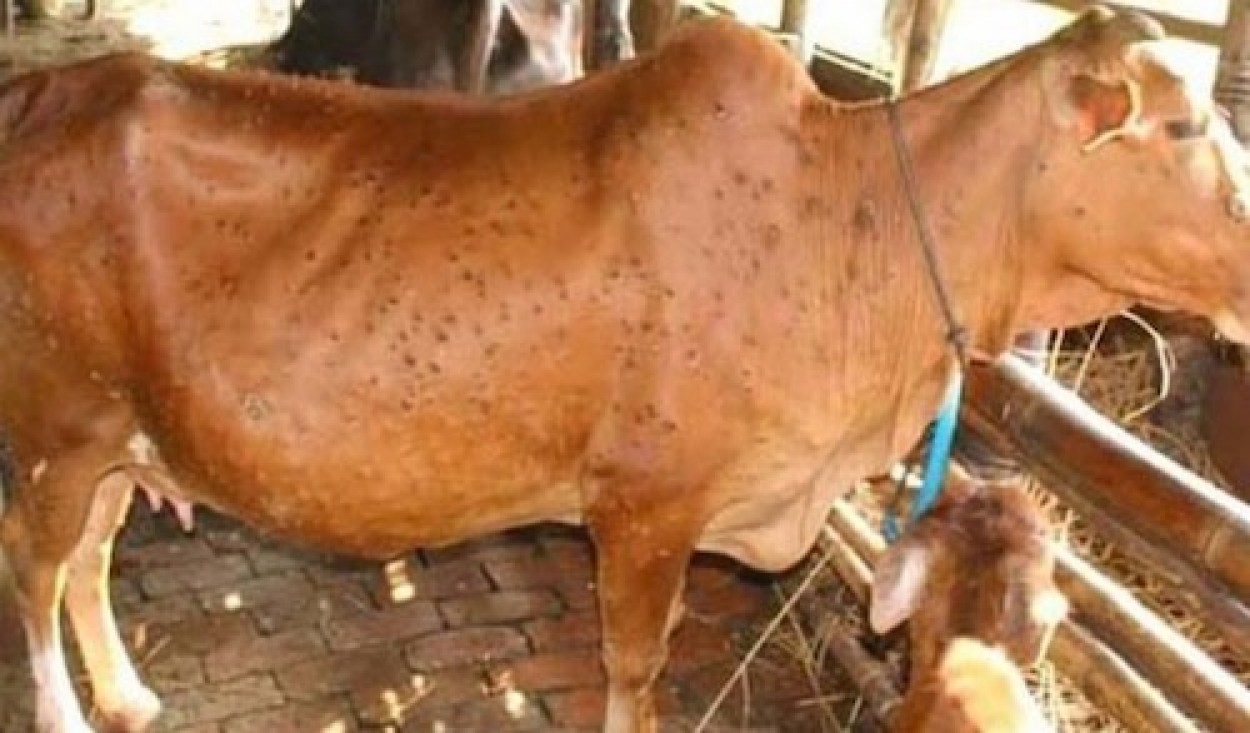 The genus Capripoxvirus includes lumpy skin disease virus (LSDV), which affects cattle in eastern, central and mainly southern Africa and sheeppox and goatpox viruses, which occur endemically in southwest Asia, the Indian subcontinent and most of Africa. Although the geographic distribution of the diseases may be different, the causative viruses are virtually indistinguishable by conventional serology and hardly distinguishable by DNA restriction assay. Such assays have indicated that African sheeppox virus is more like LSDV than goatpox virus. Morbidity in susceptible herds can be as high as 100%, but mortality is rarely more than 1% to 2%; thus, the economic importance relates to a prolonged convalescence. LSD virus is not transmissible to humans.

Lumpy skin disease (LSD) affects cattle breeds derived from both Bos taurus and Bos indicus and was first recognized in an extensive epidemic in Zambia in 1929. Lumpy skin disease outbreaks tend to be sporadic, depending upon animal movements, immune status and wind and rainfall patterns affecting vector populations. For example, the recurrence of outbreaks in Egypt and Israel after an absence of 17 years could be attributed to a combination of these factors.

According to 15th August daily newspaper Nai Duniya Divisional disease investigation laboratory, Jabalpur reported this disease from 109 villages of Mahakoushal and Vindhya region of Madhya Pradesh. Cases are increasing day by day.  In August 2020 the disease was reported from Orissa. Its high time to alert the neighbouring places from this virus.

The principal method of transmission is mechanical by arthropod vector and is perpetuated in a wildlife reservoir host, possibly the African Cape buffalo.

The severity of clinical signs of LSD (Neethling virus infection or knopvelsiekte”), depends on the strain of capripoxvirus and the host cattle breed. Bos taurus is more susceptible to clinical disease than Bos indicus; the Asian buffalo has also been reported to be susceptible. Within Bos taurus, the fine-skinned Channel Island breeds develop more severe disease, with lactating cows appearing to be the most at risk. However, even among groups of cattle of the same breed kept together under the same conditions, there is a large variation in the clinical signs presented, ranging from subclinical infection to death. There may be a failure of the virus to infect the whole group, probably depending on the virulence of the virus isolate, the immunological status of the host and vector prevalence.

The incubation period under field conditions has not been reported, but following inoculation is 6–9 days until the onset of fever. In the acutely infected animal, there is initial pyrexia, which may exceed 41°C and persist for 1 week. Lacrimation, nasal discharge, loss of appetite and often generalized lymphadenitis and oedema of the limbs followed by the development of nodular skin lesions.  In lactating cattle, there is a marked reduction in milk yield. In severe cases, nodules of 2–5 cm in diameter develop over the body, particularly on the head, neck, udder and perineum between 7 and 19 days after virus inoculation. These nodules involve the dermis and epidermis and may initially exude serum, but over the following 2 weeks, necrotic plugs may appear penetrating the full thickness of the hide. Secondarily bacterial infection can complicate the conditions. Ulcerated lesions may be present in the mouth and nares; postmortem, circumscribed nodules may be found in the lungs and alimentary tract. Healing is slow and affected cattle often remain debilitated for several months.

Clinical diagnosis presents few problems to veterinary clinicians familiar with capripoxvirus infections. Laboratory confirmation includes the demonstration of brick-shaped particles in clinical material and a PCR test is described for differentiating capripoxviruses from parapoxviruses. Capripoxviruses can be isolated in various cell cultures derived from sheep, cattle, or goats; B-type inclusions are formed in infected cells. A gene for a chemokine receptor homolog has been detected in some strains.

The agar gel immunodiffusion test and indirect immunofluorescent antibody test are less specific due to cross-reactions with antibody to other poxviruses. Western blotting using the reaction between the P32 antigen of LSD virus with test sera is both sensitive and specific but is difficult and expensive to carry out. The use of this or another appropriate antigen, expressed by a suitable vector, in an ELISA offers the prospect of an acceptable and standardised serological test.

LSDV vaccines are used to control the disease. Attenuated or inactivated vaccines are available in endemic countries; sheeppox vaccine can protect cattle from lumpy skin disease.

As such no treatment of virus is available. Isolation of diseased animal with symptomatic and supportive treatment can be done according to the condition of animals in the supervision of Veterinarian.