The 20th Meeting of the National Tiger Conservation Authority (NTCA) was held in Pakke tiger reserve in Arunachal Pradesh on 9th April under the chairmanship of Union Minister for Environment, Forest & Climate Change Shri Bhupender Yadav.

For the first time in history, the NTCA meeting happened outside the national capital. In order to get first-hand information about reserves, local issues etc. the Union Minister had directed that henceforth these meetings will be held outside Delhi in forest areas or in tiger reserves.

On the occassion minister said that we should promote our tiger reserves across the country which have immense flora and fauna while at the same time ensuring the livelihoods of the people dependent on forests.

Minister also pressed on the active involvement of locals for conservation and better development of forest areas and tiger reserves. He said that we should conduct meeting with all stakeholders including forest officials who deal with different issues, local villagers, experts, and students for the same.

On this occasion, around 100 air guns were surrendered by the local villagers. Rampant use of Air guns was a  problem in northeastern states. In Arunachal Pradesh in March 2021, had started the Air Gun Surrender Abhiyaan which has so far yielded great results.

The Minister released the standard operating procedure for tiger reintroduction and supplementation in the wild, forest fire audit protocol for tiger reserves, and technical manual on MEE of Tiger reserves in India prepared by NTCA. 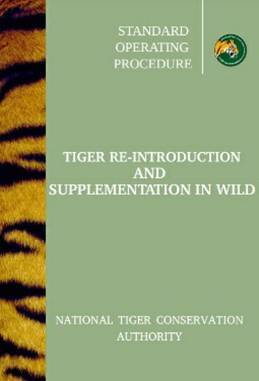 India harbours about 70% of the world’s tiger population in wild. The tigers occupy different landscapes in the country. While some landscapes have rich and viable populations in accordance with the habitat and prey base, there are some habitats that are under-occupied for various regions but have the potential to support a better tiger population. There may be some more habitats where the population of tiger have disappeared.

In this scenario, it sometimes becomes imperative to re-introduce tigers or supplement the existing population. This being a sensitive and technical task, the NTCA has prepared a Standard Operating Protocol (SOP) to deal with the reintroduction and supplementation. The SOP takes into account, the scientific knowledge available on the subject as well as conditions that may be typical to India. To deal with tiger reintroduction and supplementation in the wild in areas where it was historically present but is now being extirpated or found in low densities viz-a-viz the carrying capacity, due to various reasons but welfare factors to foster tiger presence still exists or can be improved with adequate management intervention. Therefore, the NTCA is releasing an SOP titled, ‘Tiger Reintroduction and Supplementation in Wild Protocol’. Forest Fires play a crucial role in maintaining the dynamics of forests. Fire can play a vital role in healthy forests, recycling nutrients, helping tree species regenerate, removing invasive weeds and pathogens and maintaining habitat for some wildlife. Occasional fires can keep down the fuel loads that feed larger, more destructive conflagrations. However, as populations and demands on forest resources have grown, the cycle of fire has spun out of balance and these uncontrolled and repeated fires at short succession are one of the major causes of forest degradation and bio-persity loss. Increasing forest fires have now become a global concern. So, in order to help the tiger reserve managers assess their fire preparedness and manage the complete life cycle of forest fires, the NTCA has prepared a Forest Fire Audit Protocol for Tiger Reserves which is now being released. The survival of tigers is dependent on conservation and management efforts and to gauge the success of conservation efforts as well as to guide management inputs, it is important to assess the management effectiveness of Tiger Reserves. India is amongst the selected countries in the world that have institutionalized the MEE Process. The globally accepted framework of Management Effectiveness Evaluation (MEE) of tiger reserves has paved way for successfully assessing the tiger conservation efforts in the country. The MEE exercise in tiger reserves was initiated in 2006 and the four-cycle has been completed. Since then a lot of experience has been gained and the need was felt to revisit and review the whole process. Accordingly, a committee was constituted by the National Tiger Conservation Authority to revisit and review the MEE criteria for the 5th cycle of the MEE exercise starting in 2022. The intention was to bring about parity in the analysis of perse tiger reserves of the country and to guide the evaluators with respect to the assessments to be made in the coming financial year. Based on the suggestions made by the committee, the technical manual on Management Effectiveness Evaluation (MEE) of Tiger Reserves in India is being released by NTCA.