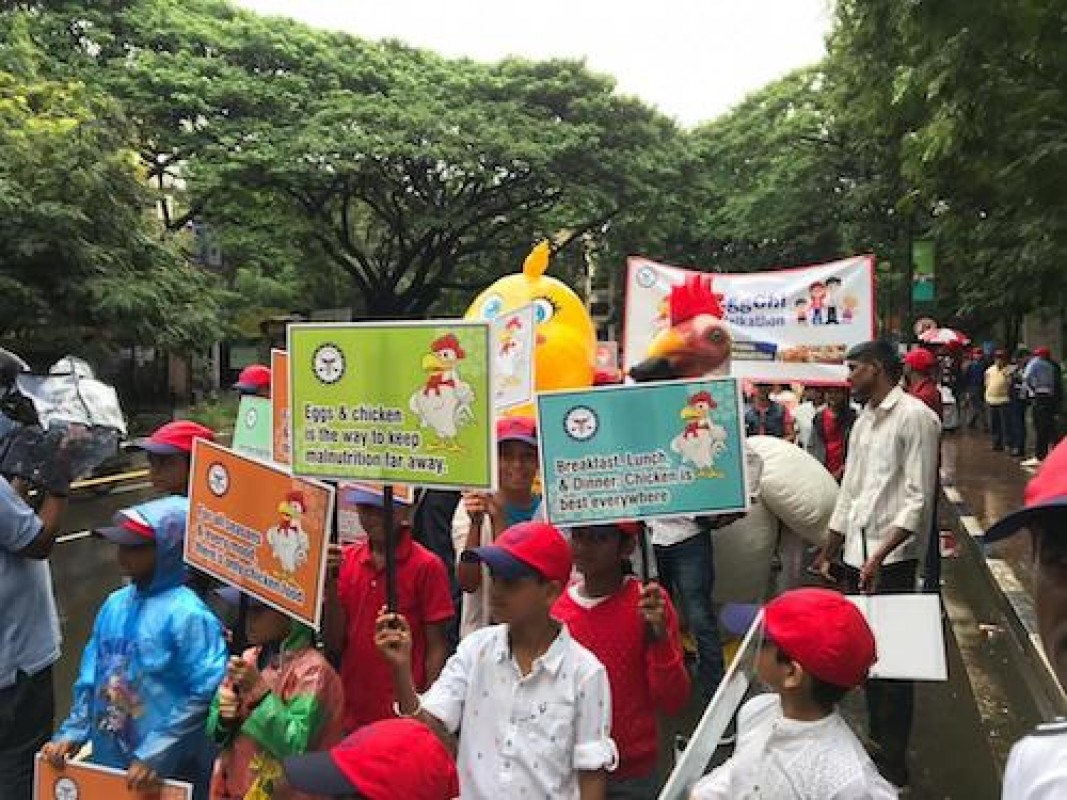 The public awareness rally was organised by “Vets In Poultry (VIP)”  association in Pune at JM road & FC road on 28th of July, Sunday early morning at 7.30 am. More than 500 technocrats from the animal health industry working dedicatedly for the poultry industry, Society peoples, Industry peoples and Media persons were attended. The “EggChi Walkathon”  started from Balgandharva Rangamandir travelling Jm Road - FC Road to end up at Sambhaji Udyan with the distribution of boiled Eggs & Chicken products. The request letter for promotion and overcoming social misconceptions and mid-day meal eggs inclusion was handed over to former agriculture minister Mr Sharachandra Pawar and acting member of parliament Mr.Girish Bapat, BJP. Pune. “The rally was impressive at public interaction, conducting interviews of pedestrians who came for a morning walk on JM & FC road and for breakfast as well,” Said the president of VIP Dr Ajay Deshpande. We a technocrat face of the industry conveyed the fare message about the production system, it’s rigorous controls for addressing the nutritional requirement of the society especially when we as a country are topmost in production of eggs and least consumer, unfortunately. This was also a good platform to clarify the myths and misleading of media, society towards consuming egg & chicken added by the Dr Pedgoankar, GM, Venkateshwara Hatcheries.

Dr.Ajit Ranade, Dean at Mumbai Veterinary College, addressed the requirement of protein in our diet and relative importance of eggs and Chicken. He has also appealed the general health-conscious morning walkers to focus protein-rich diet along with exercise. Dr V R Kulkarni while talking to media also addressed the importance of current protein requirement of the Indian population and way outs of meeting the same through poultry farming products. He has also converted the attributes of poultry products from health & beauty point of view.

More than 500 volunteers, most of them veterinarians & industry persons came forward outspokenly to discuss with the public using over 100 placards, banners in an organised way. The group marched from Janshi Rani Chouk discussing with bus drivers, shopkeepers, auto-rickshaw drivers, on the way to local residents of JM road and FC road Toddlers, youngsters and female participants and everyone were enjoying the drizzling showers during the rally with all due arrangements of safety.

The public interacting was addressing questions from the public about the nutritional composition, it’s safety, table eggs been not fertile so-called Veg Eggs & high in nutritive value, the importance of chicken & why Indian local produced chicken is safe to consume

Methodic 8 teams were formed amongst the team VIPians & industry colleagues for this rally. Right from traffic control, selfie points, every even was been backed by enthusiastic volunteers for the smooth conduct of the rally. The producers like Venkys, Godrej, Japfa, Baramati Agro, Sidpinayak, Om Chick, VRK, Kiran Breeding, Yojana etc and their officials were quiet easily found mingling with the public during this event. Travelling rally finally concluded by 10 AM by distributing chicken nuggets and boiled eggs with the return gift of ready to eat chicken products for the participants.

3- Explaining the scientific background to break the false propaganda and fear against the egg and chicken consumption in the society along with improving connect of technocrats in the poultry industry.

Dr Santosh Ire, Secretary, Vets In Poultry (VIP) and VIP Committee Members & Office Bearers thanked every contributor direct or indirect to deliver the objectives effectively and especially well aligned with each segment of the poultry industry.